Back in February, I got an idea to make cross-stitches for my friends’ dogs, Arthur and Penny.

This got me started on what became a series of dog-inspired cross stitches.

Our dog Harpo is named after the Marx Brother, but more specifically, he’s named after Harpo Marx’s autobiography, Harpo Speaks. So I made a cross stitch of the book cover, with Harpo’s titles on the bottom instead of the author information.

I was pleased with this one because I used a photo converter to make a pattern from a  picture of the book cover that I found online. It was an experiment, and as you can see, it’s not perfect. The mouth came out a bit funny because the original picture shows Harpo unzipping his lips, and I simplified it. But on the whole I think I got the idea of the cover well and it’s a tribute to both Harpo Marx and our dog, Harpo.

And I’ve just finished one for my friend’s new dog, Cannoli. 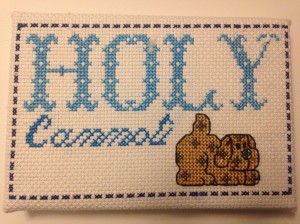 This one was fun because I made it freehand, using patterns from several different books.

Now I want to get a program so I can design patterns with more detail. I want to plan things that are a little bit more complex. For more dogs that I know and love.